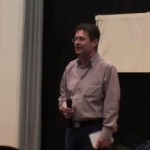 Greetings to the audience by dr. Nikos Hatzitrifon, head of Cooperation Against Homophobia
and responsible for the LGBT Film Panorama, opens the event. 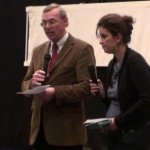 Mr. Îšarl-Heinz Thalman, director of the German Institute Goethe in Thessaloniki,
speaks to the audience during the start of the Panorama. Next to him Mrs. Christina Biermann, is translating. 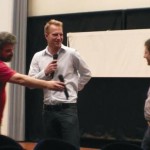 Mr. Arnaud Genestine from French channel TV5Monde speaks to the audience during the start of the Panorama.
(Left: Mr. Forsos, right: Mr. Hatzitrifon) 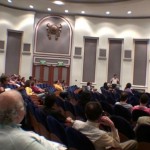 The audience during the speech of the German film director Mr. Andre Schaefer (in the background, right). 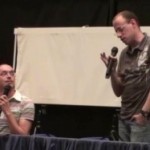 The Israeli film director Yuval Bagno (right) speaks about his film and his country, after the screening of his film.
Mr. Odysseas Anastassopoulos (left) is translating). 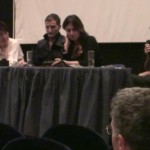 The discussion about the role of the human body:
The hon. professor of A.U.Th. and Head of the Macedonian Museum of Modern Art dr. Xanthippe Hoipel (left),
the coordinator of the discussion Mr. Spiros Varrveris, the psychoanalyst Mrs. Kassiani Feleki and the film reviewer Mr. D. Babas. 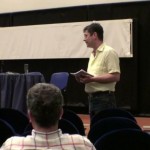 Dr. Nikos Hatzitrifon is announcing the three best short films according to the voting of the audience. 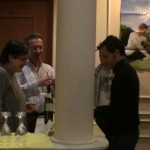 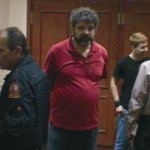 In the foyer of the screening hall. Mr. Notis Forsos, director of OLYMPION Mantion (in the centre) and participants of the Panorama. 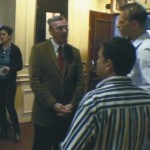 In the foyer of the screening hall. The director of the German Institute Goethe in Thessaloniki, Mr. Karl-Heinz Thalmann, the General Consul of France in Thessaloniki,
Mr. Christian Thimonier, the representative of the French channel TV5Monde Mr.Arnaud Genestine and participants of the Panorama. 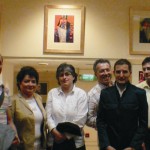